Right now in our community, a number of organizations are working to provide the best possible experience for all young children, and one of the main focuses of Springfield Public Schools is to ensure equity of opportunity, so that socioeconomic status does not define student success. Although many trends are on their way up, such as school readiness and expansion of Parents as Teachers, we still have a long journey towards tackling some of Springfield's toughest systemic issues, such as poverty and child abuse and neglect. Below we outline our problems, but also how the community is rallying to fix them. 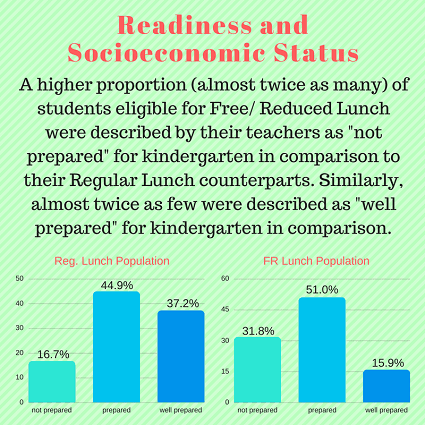 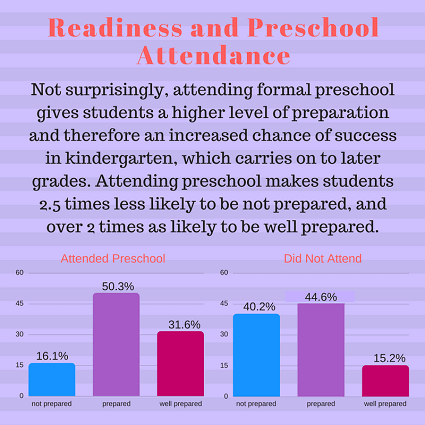 These similar sets of data reveal a stark reality: the proportion of Free/ Reduced Lunch students who were not prepared (31.8%) nearly matches the proportion of students who did not attend preschool and were not prepared (40.2%), and the rest of the numbers mirror each other as well. What we can deduce from this is that low-income students, whose families can't afford preschool, are disproportionately the ones who are unprepared for kindergarten and who are starting behind.

This situation reflects what is called the achievement gap, which is present even before preschool begins, when a child is as early as 18 months old. Children who start school without basic literacy are four times more likely to drop out. Without access to early childhood programs, low-income students start behind their wealthier peers and may never be able to catch up, resulting in repeated years in school (which are a cost to the family and society), higher dropout rates, and lower educational and job attainment, thereby allowing the cycle of poverty to perpetuate and causing these members of society to be more costly (i.e. reliance on welfare, Medicare and Medicaid, food stamps, and contributing less back in taxes.). Research shows the best way to to level the playing field, boost our economy, and solve this problem is simply to expand access to quality early childhood programs.

Unfortunately, in our community, this is not the only problem our youngest citizens and their families face. In addition to unequal education access, some of our young children and students suffer troubling home lives and economic struggles..

1. Although child abuse and neglect rates in Greene County have slightly decreased, it remains a devastating issue that is well above the state average. The number of children who were substantiated victims of abuse and neglect went from 405 to 384, but this is still a large problem looming in our community that needs to continue to be addressed.

2. Children who do suffer abuse and trauma find it hard to cope, bringing the hurt and stress with them to child care and school, which can lead to disruptive behavior and even expulsion. Children who have experienced trauma are much more likely then their peers to be expelled or fall behind in school, and preschool expulsions are associated with expulsions later in school. It's no surprise that with our high rate of abuse and neglect comes a high rate of suspensions and expulsions. Springfield's rate is two times higher than the Missouri average and 17 times higher than the national k-12 rates.

3. Although it has ever decreased by 2.4% from 2011, the proportion of children under 18 living in poverty in Greene County still remains at 21.4% as of 2015. Almost a quarter of our population of children- 12,598 kids- live in extremely poor conditions, without access to most basic needs such as adequate food, healthcare, education, housing and even a safe environment.

We need to continue to work as a community- parents, teachers, students, staff, and businesses- to focus on ending these issues and creating a more equal and ultimately a more productive community for the future.

Right now, a number of programs and initiatives have been implemented or (hopefully) will be in the near future by our partners to curb these systemic issues in our community. Mayor's Commission for Children- which serves only as an advisory board- supports, encourages and advocates for these initiatives.

1. Parents as Teachers, a parent education program that helps families with children prenatal to age three prepare for school with home visits, recently added 14 parent educators, expanding the program now to every elementary school in Springfield Public Schools. With the expansion, SPS now has the largest PAT program in the country.

2. In 2016-17 and 2015-16, Parents as Teachers hosted over 700 community events for families, including story times, toddler/ preschool yoga, and kindergarten preps, which help parents connect with resources and help kids learn and socialize.

3. Among other things, IGNiTE, Springfield Public Schools' three-year technology roll-out, has worked to ensure equity of opportunity by equipping students with modern tools for success, such as supplying all 25,000 students with personal learning devices as of August 2017 and adding over 1,500 mobile hotspots for students without Internet access at home.

4. As part of its comprehensive facility master plan, Springfield Public Schools plans to add 200 more children to early childhood classrooms each year for the next three years, so that by 2021-22, 600 more students will be served. Although this is not yet in place, for the first time in many years, the state of Missouri passed a budget including full funding of the foundation formula, which gives the district a higher chance of success and reason to hope.

5. Early Childhood One Stop, a collaboration of more than 15 organizations, was formed to serve as a central referral hub for families looking for service information and to connect them with resources supporting basic needs, family-friendly activities, child care, health services, and support groups.

6. Springfield Public Schools, Ozark Technical Community College, and Every Child Promise have partnered in an effort to raise awareness and interest in increasing quality of care for young children by pooling together local professionals to study and improve their programs in what they call the Early Learning Leadership Academy.

To find more information about the problems and progress of Springfield, including early childhood and education, see the 2017 Community Focus Report, which identifies both new and ongoing "Blue Ribbons" and "Red Flags."